Does your team need to regain a sense of direction? Everyone goes their way and you feel like you can’t cooperate with them in the office? Has anyone lost their compass and is causing the whole group to take the wrong direction?

This is the right time to organize an Urban Game in UAE, a way to explore the most hidden parts of the city together and rediscover the team spirit.

The Urban Game Team Building, also called City Game, is in a way similar to the Treasure Hunt and it is probably one of our favorite corporate teambuilding formats. It is a creative and exciting adventure that tales place in a city of art, an interesting area to visit, or even in any place where the customer wants to go. Discovering a new or an old city while at the same time playing with your colleagues or friends and carrying out various kinds of creative tasks, is probably one of the best ways to spend a day together.

Most of the times, even if we’ve already been to a city, we haven’t been able to see everything about it. In the same way, we can’t even know everything about it. It may hide mysteries and curiosities, but we will get to know about their existence only by asking local people. This is one of the many things that team member will have to do while participating our Urban Game Team Building.

Certainly, it will bring a lot of benefits for the team to be in a completely new place, outside the usual office environment. Also, it will be amazing to discover in their colleagues the qualities and capacities that have always remained hidden.

Team Building Urban Game: a tourist trip out of the ordinary

Visiting the city with an Urban Game Team Building activity means having an experience that has very little in common with the usual tourist tour. Participants will not be just tourists going around, but they will discover the places of greatest interest of the city, its historical monuments and the most beautiful prospects under a completely different point of view. In fact, all of this will not happen in the form of a tour with explanations given by a guide, but in a playful, interactive and fun way. With our Urban Team Buildings, not only we have already conquered Dubai and Abu Dhabi, but also the most famous Italian and foreign art cities. We’ve been, for example, in Milan, Venice, Turin, Rome, Florence, Lucca and Como. Outside of Italy, instead, we have already been to several cities such as Barcelona, Prague and Istanbul, even on Malta island.

But we are not going to stop here! We are a young team. We love to travel and we are always ready to go on a new adventure. Do you want to come with us and find out Doha‘s hidden secrets?

What does the Urban Game consist of?

First of all, each participant is given the necessary materials and the rules of the game together with a simplified map of the place. Sometimes, with the map we also give them a compass, but not always. Anyway, these are the only tools available for orientation in the city.

Then, based on the rules of the game provided and the goals to be achieved, each team thinks and decides which path is the better choice. Equipped with the necessary materials and clues, the teams must follow pre-established guidelines. That’s mostly because we want them to discover each and every part of the city.

The peculiarity here lies in the fact that every team is able to continue the Urban Game Team Building only through the interaction with the local people. In fact, teams must play and interact with the “urban life”. For each passed test they will get points, which will eventually be used in the end of the activity. The team that has gained the highest scores will be declared the winner and will receive the title of Urban Game Master. 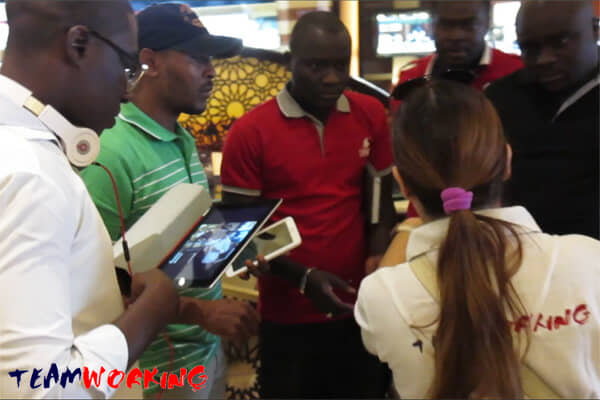 Three components mixed together in a passionate and high-engaging game that is a great source of pleasure and fun. As we said, our game participants have the possibility to visit the city in an unusual, enjoyable way but the most important thing is that team members need to collaborate together in order to accomplish challenging tasks!

If you like traveling and discovering new things, this team building is the right opportunity for you. It will be a journey without a suitcase to discover different new sensations. Even if you don’t win the challenge, this event will still be a victory for you because you will take home a lot of memories about emotions, places and people. With the Urban Game your personal and working life will undergo a huge change, obviously for the better.

Your life will take a new turn.

Would you like to discover a city with an Urban Game?
Book now your event!

Urban Game is a type od teambuilding that puts together the teaching aspect with the pleasure of discovery and excitement.

For this, it is an activity that does business training because it:

After this activity the team will return to the office with a completely different attitude. Each member of the team will have in mind the experience they have just had, it will be an indelible memory. Their behavior in the office will be completely changed, everyone will look for each other in order to cooperate in their job.

Another version of the Urban Game is the Urban Game iPad. It is a City Game team building that takes benefit from the most innovative technologies, especially the iPad. Participants will have even more fun with it. In fact, our tour becomes even more appealing and interactive. Team members will have to discover the city while taking photos and short videos. They can also challenge other teams in quizzes and puzzles, sending pranks and much more.

What will participants remember about this Urban Team Building?

As we said, the participants, by creating their own “visit”, will travel different phases. These will allow them to know various aspects of the place: artistic, historical, cultural and also gastronomic. The game, in fact, can also include food and wine breaks. What a great opportunity to taste typical dishes, get to know the local culture and the specialities of the place!

The most important aspect of this Team Building format consists in the many inspiring and motivational activities within it. Urban Game, just like Treasure Hunt or Urban Game iPad, is an excellent means that allows participants to cooperate, learn to communicate and interact with local people. Team members will also improve their way to express themselves and, more importantly, the get to know each other in a creative way. 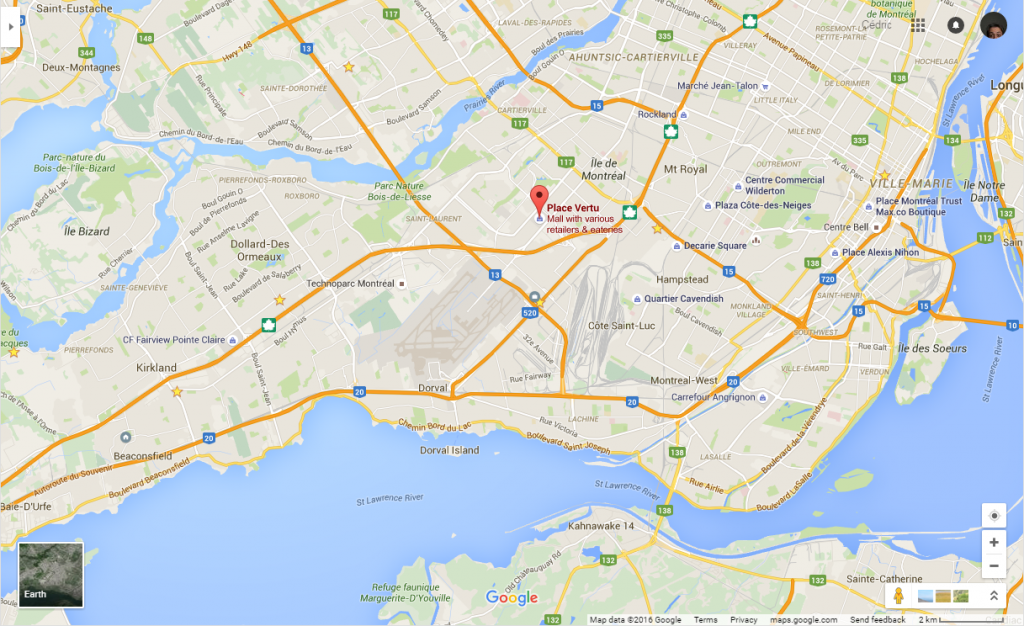 Treasure Hunt: follow the hints, recognize the places and travel around the city! A City Game a treasure hunt but also much more. Here you will have to face creative challenges while racing against the other teams. May the most creative win! 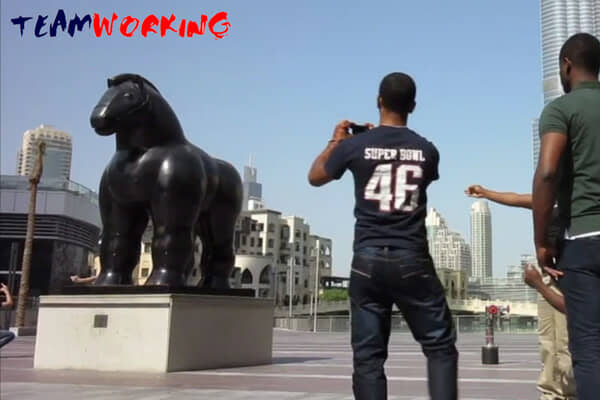 Urban Movie: let’s create our own memory of the visit in the city… making a movie out of our travel! A commercial spot or an authentic short film: it depends only on the fantasy of the Team. Someone will write the script, others will direct and perform. 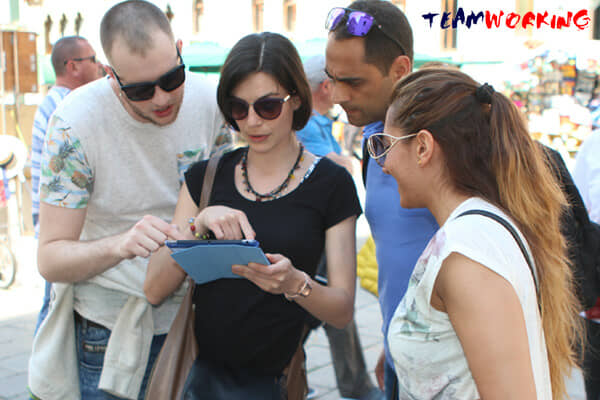 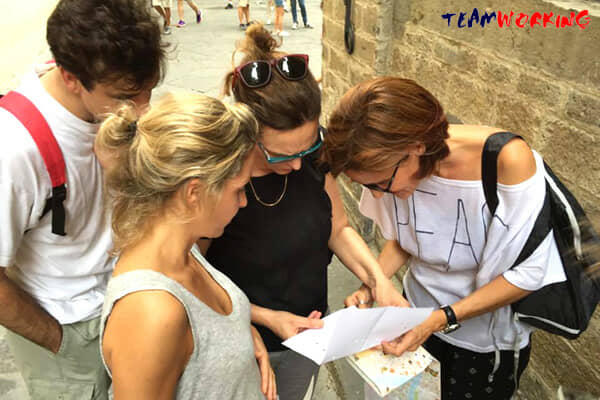 Rescue Teamr: A mission to accomplish, a criminal to stop, a limited amount of time: the participants of the Team Building Rescue Team must do nothing less than save humanity! The mission can take place in the streets of Dubai or other cities, with a strong interaction with places and inhabitants.

Don’t forget to book your next corporate event!
Contact us now!