Pizza Making Team Building in Dubai and Abu Dhabi is a fun activity for people coming from different countries. Participants, no matter from which part of the globe they come from, will observe the preparation of true Neapolitan pizza. Then, after a short briefing, they will prepare it themselves under the guidance of a master pizzaiolo.

In fact, pizza is one of the most well-known and beloved Italian dishes in the world. Originating of Naples, in Italy pizza is prepared in many ways and many different versions, but everywhere it keeps the inimitable flavor that distinguishes it and makes it an honor of each Italian.

Preparation of dough (included the typical maneuvers of a Neapolitan pizzaiolo!), choosing of ingredients, attention for the appearance of the plate: these are the elements of the challenge that the teams will face during a Pizza Making Team Building. 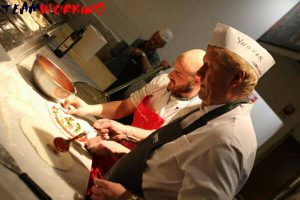 This team building activity is divided into two phases. In the first part participants, divided into teams, observe a master pizzaiolo making and kneading the pizza dough and repeat his maneuvers. It’s a very fun moment, where even those who aren’t usually interested in cooking can try.

During the second phase, each team enters the kitchen to roll out and season their pizzas. The dough is rolled out by hands and then seasoned with the classic ingredients of a Pizza Margherita: mozzarella, tomato puree, olive oil, basil. Finally, the bravest can try to bake themselves their pizzas in the wood oven!

Once the pizza is ready, we come to the tastiest part of the event: each participant can eat the pizza he has done with his own hands, and try those of his colleagues. At the table begins the conversation, while group dynamics become more peaceful and healthy.

Why is Pizza Making so popular?

First of all, because it’s a source of pure fun! The teams learn to prepare one of the most popular dishes all around the world. There is also space for some healthy competition between participants and teams. Another “ingredient” of our pizza? Creativity: each participant express him/herself by choosing the ingredients and the presentation of the plate!