How to Create a Solid Team?

How different would it be if we would be enthusiastic to go to work and meet our colleagues every day?

Every day we interact with other people, both on a personal or professional level. Therefore, every day we have to interact in different relationships with a multitude of people whose opinions, ideas and feelings are often different from ours.

It’s not a secret that team working isn’t easy at all. It demands patience, empathy and courage. However, a cohesive and proactive team brings far greater advantages than individual work. That is why a Team Coaching process is fundamental for all those who have the aim of strengthening their group and achieving performances previously considered impossible.

But what is Team Coaching? As the word “coaching” says, it is a training. In a nutshell, it means a long period of a group towards a specific goal. With Team Coaching we try to invest more on the processes and on the final performances, keeping an eye on the BUSINESS CLIMATE and COMMUNICATION, in particular. For a team to work well, communication must be fluid, clear and direct.

TEAM COACHING: WHY DOING IT?

By working on team alignment, sharing objectives and breaking down perceived limits, strong group cohesion can be achieved, with consequent improvement in performance and in the working environment.

For this reason, all groups that aim to strengthen team spirit and achieve the corporate objectives established should undertake a Team Coaching path to achieve concrete change.

TEAM COACHING: HOW LONG IS IT?

The time is customizable!

It’s a bit like asking “when is it useful to go to the gym?” Potentially always. Then, the choice depends on the characteristics of the group, the objectives to be achieved and the available time. There are, for example, moments when it is important to achieve a goal, such as a listing on the stock exchange, a fusion or the conquest of a new market share. The clearer the goal, the greater the chances of this being achieved.

Generally, we recommend a path of at least 4 meetings, which represent the minimum time to work on the basic concepts. On average 15 meetings are those necessary to work deeply and 360 ° on the team. The duration differs between 6 months and one year, the minimum necessary to achieve the established goals and notice the changes, always and in any case in a flexible way according to the needs of the group.

TEAM COACHING: WHAT DO YOU DO?

The Team Coaching path is characterized by a first moment of ALIGNMENT od the team, followed by individual meetings and experiential checkpoints for the team, micro-goals or what we call milestones, important intermediate goals.

The topics we talk about in this long journey are, for example, communication within the team, language of the leadership, management of time, change and even stress dealing… and many more based on the actual needs of the team.

Therefore, moments of reflection and comparison will alternate with moments of activity.

TEAM COACHING: WHO IS IT FOR?

A Team Coaching path is suitable for all those Teams that aim for concrete and continuous improvement.

Due to its nature, however, it is especially recommended for groups that present limits and difficulties of various kinds, such as:

Team Coaching is therefore an excellent support for those Teams that face stressful challenges and changes.

TEAM COACHING: FROM WHERE TO START?

Often teams want to work on final goals without first know from where they start. By contacting a group of experts who has the skills to accompany the Team along a demanding and profound path, you can find someone capable of answering your questions and resolve your doubts and who has the right experience to offer you what best suits your company needs.

This is an important investment and for this reason it is essential to take the time to understand the actions to be taken in order to make the team improve.

TEAM COACHING: WHY OUR METHOD IS DIFFERENT?

Because we have an EXPERIENTIAL method. We try to make people live REAL moments through formation and experiential training. We pair the logic level to the emotional level (or analogic).

We of Teamworking, among the top experts in Italy, provide our experience to guide you in a patch that we are sure will leave you satisfied. Together we will work to help you find a bond that will allow you to achieve new results.

Do you think we’re exaggerating?

We are aware that people often don’t really know what to expect from a Team Coaching path and that’s why we want to share some of the points we usually talk about when we start.

To begin with, we will talk about Vision, Mission, Values and Competences to be able to give you an idea of the topics we deal with and an image of the journey that the Team will travel. Obviously, these are wide concepts that need to be contextualized and customized according to the individual reality considered, under the guidance of an expert coach who can indicate the most suitable direction for the needs of the group.

The concept of Vision is often mentioned but rarely studied in depth, thus remaining empty in meaning. It is a concept abstract by definition, as it is a matter of SEEING and IMAGING, something that is not yet there, but which, despite this, is nevertheless very important for the achievement of a goal.

The Vision is in the end and the beginning of every successful company: that’s why it shouldn’t be underestimated.

It is important to understand what is the role we want to have in the world we imagine. For this, we must define and, above all, share the Vision within the Team. Continuously communicating with others can become frustrating, especially when it happens that we do not feel included or fail to make ourselves understood by others. It is not easy to share the same ideas and work in the same direction. Prejecting one’s energies towards something that does not yet exist, if not just in someone’s head, is a non-trivial effort. Requires CONFIDENCE.

Let’s begin with the most common mistakes that usually come out in the definition of a corporate Vision:

These mistakes are more common than you think, actually, they’re almost normality! Starting with a wrong or not shared Vision, the foundations of a solid and lasting growth can be damaged.

Vision and Mission, if shared and clear to all, are a concrete stimulus fro the team.

If previously we talked about Vision as an abstract concept, now, with the Mission, we are approaching the concreteness of our company.

Sharing an understandable and motivating Mission represent for the Team an incentive, more than a goal. To achieve the internalization of the Mission, it is important to make the team aware of the basic business concepts.

We will never tire of repeating how important it is to not take for granted the sharing of the meaning of a single word. Not discussing the value of a concept is one of the main cause of a misleading communication. Just think of how the same word can be explained in many different ways by each one of us. If, for example, I say the word “victory”, each person would invoke a different image or thought.

The cohesion of the Team’s Mission and the individual one is a point to which every working reality should give the right importance.

Values are the principles against which we set our choices. They allow you to make a choice not only among the goals but also between the means to achieve them.

In other words, values represent a continuous indication in the decision-making processes, just like a lighthouse at sea showing the straight path to ships.

As important as asking questions first, it is also impossible to predict every kind of situation. It is in this case that Values come into play, establishing the primary principles to follow.

A constant indication is not only fundamental for all those occasions when we do not know how to find the answer, but it also helps to focus towards a precise path, decreasing the risk of energy and time dispersion. 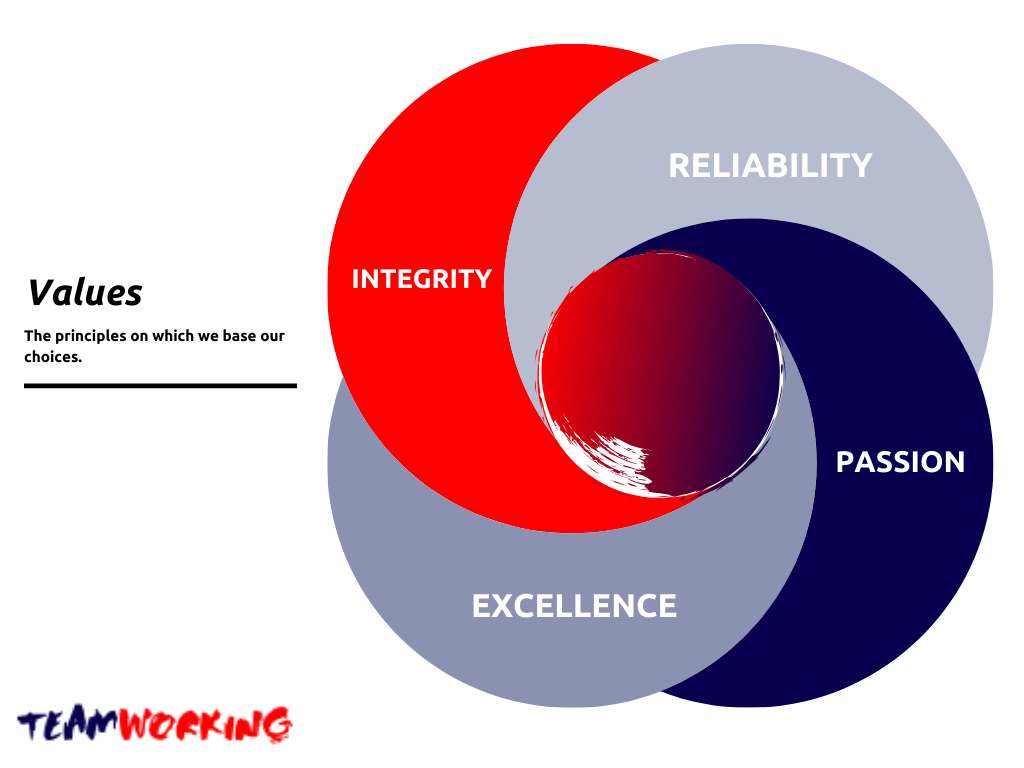 To understand if the team has the right skills, we must first understand what specific skills are necessary for the company.

Small businesses often take technical skills as a starting point. But managerial skills are the ones that make the real difference, both in a multinational company and in a family business.

Many, in the growth process, define a goal but get lost when it comes to deciding how to achieve it. From the abstract part of the Vision we must therefore move to a more concrete strategy, the real stake of the team. If the necessary tools and knowledge are not clear, team success will never be possible.