Urban Movie Making in Dubai: a Film among Skyscrapers

A variety of Scavenger Hunt that would add some creativity to the pleasure of visiting the city of skyscrapers? Here it is: Urban Movie Making in Dubai!

Take a look at this spot to know more:

With materials and technical support provided by our movie making trainers, participants film their impressions of the city. 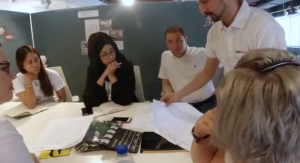 The aim is to create a commercial spot or a really short film with a basic idea, a plot and some main characters. First of all, each team decides the concept and write down the screenplay. Then participants choose whose of them who will be actors and the ones who, on the contrary, will stand behind the camera. Each role is very important because success depends on the united efforts of everybody. Moreover, some participants will have to take care of music and special effects, to transform their spot in a real little jewel of cinema.

Key teambuilding factor in Movie Making in Dubai, first of all, the necessity of dividing the tasks inside the group. It’s also very important to communicate and share ideas without rigid corporate hierarchies. Not even the greatest Hollywood director can create a movie without his team!